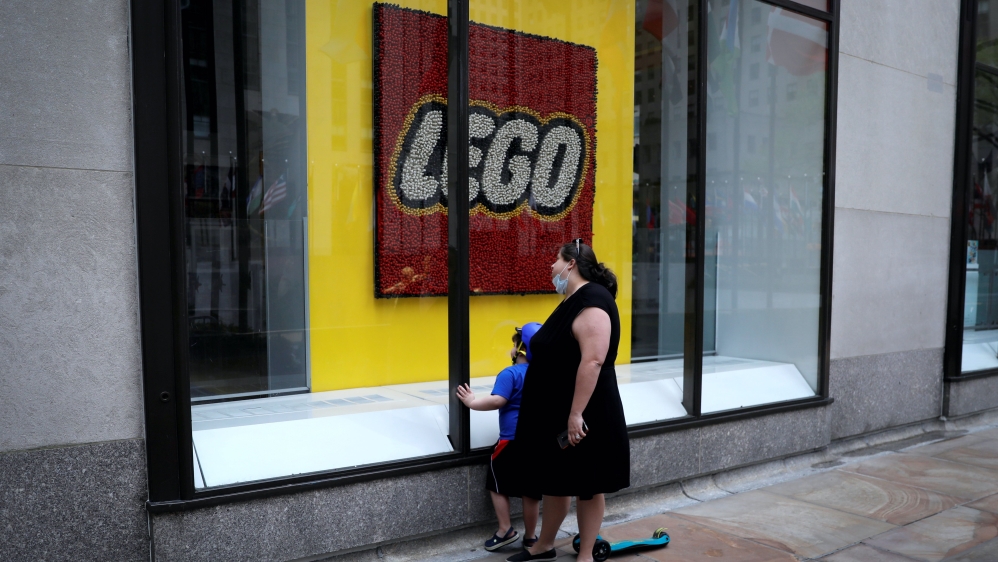 United States consumer spending slowed in August, with a key retail sales gauge unexpectedly declining, as extended unemployment benefits were cut for millions of Americans, offering more evidence that the economic recovery from the COVID-19 recession is faltering.

The report from the Department of Commerce on Wednesday ramped up pressure on the White House and Congress to restart stalled negotiations for another fiscal package. At least 29.6 million people are on unemployment benefits. Consumer spending accounts for more than two-thirds of the US economy and signs of fatigue are likely to grab the attention of Federal Reserve officials as they wrap up a two-day policy meeting.

“Consumers are being increasingly cautious with their spending,” said Gregory Daco, chief US economist at Oxford Economics in New York. “If Congress is unable to extend fiscal aid to households in the coming weeks, the economy will be particularly susceptible to a cutback in consumer spending, especially from the lowest-income families.” 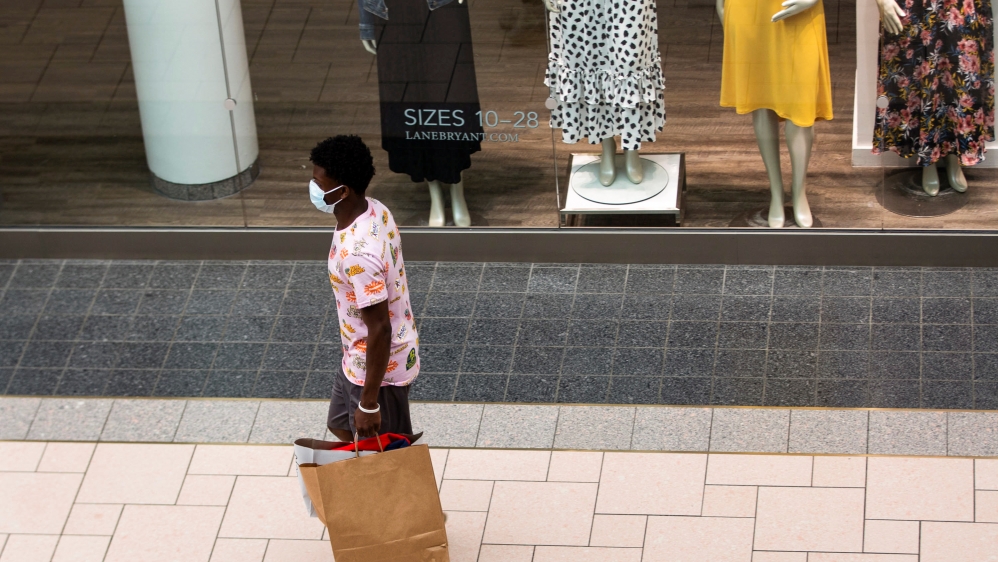 A man wearing a face mask walks at the Destiny USA mall during the July reopening of stores as coronavirus restrictions ease, in Syracuse, New York, US [File: Maranie Staab/Reuters]

Retail sales account for the goods component of consumer spending, with services such as healthcare, education, travel and hotel accommodation making up the other portion. Services have been hardest hit by the coronavirus, which plunged the economy into recession in February, and spending on services remains about 10 percent below the pre-pandemic level.

US stocks were trading higher as investors hoped the Fed would keep interest rates low for a prolonged period. The dollar was little changed against a basket of currencies. US Treasury prices were higher.

The retail sales report followed data this month suggesting the labour market was losing speed after astounding employment gains in May and June as businesses reopened after being shuttered in mid-March to control the spread of the coronavirus. 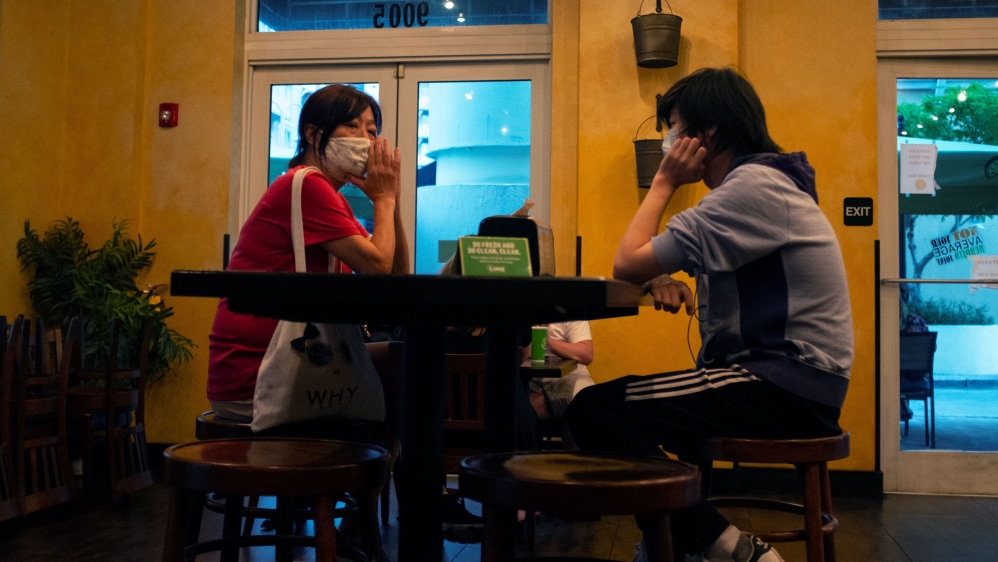 People wearing protective face masks wait to be served as Miami-Dade county allows indoor servicing in restaurants after easing some lockdown measures put in place during the coronavirus outbreak, in Miami, Florida, US [File: Marco Bello/Reuters]

A $600 weekly unemployment subsidy expired in July. It was replaced by a $300 weekly supplement, which was not available in all states, and funds for the programme are expected to run out this month. Economists estimated that the reduced unemployment benefits supplement cut income by about $70bn in August.

Government money was credited for the sharp turnaround in economic activity that started in May. Still, consumer spending is expected to rebound strongly in the third quarter because of the robust momentum in core retail sales at the tail end of the April-June quarter.

Consumer spending suffered a record collapse in the second quarter. The pullback in core retail sales in August, if sustained, would set up consumer spending on a slower growth path in the fourth quarter. Growth estimates for the third quarter top a 30 percent annualised rate. The economy contracted at a historic 31.7 percent pace in the April-June quarter.

“We have concerns about how strong the recovery will be in the fourth quarter and our optimistic 7.0 percent real GDP growth looks on increasingly shaky ground unless more jobless workers can find a place in this economy,” said Chris Rupkey, chief economist at MUFG in New York. 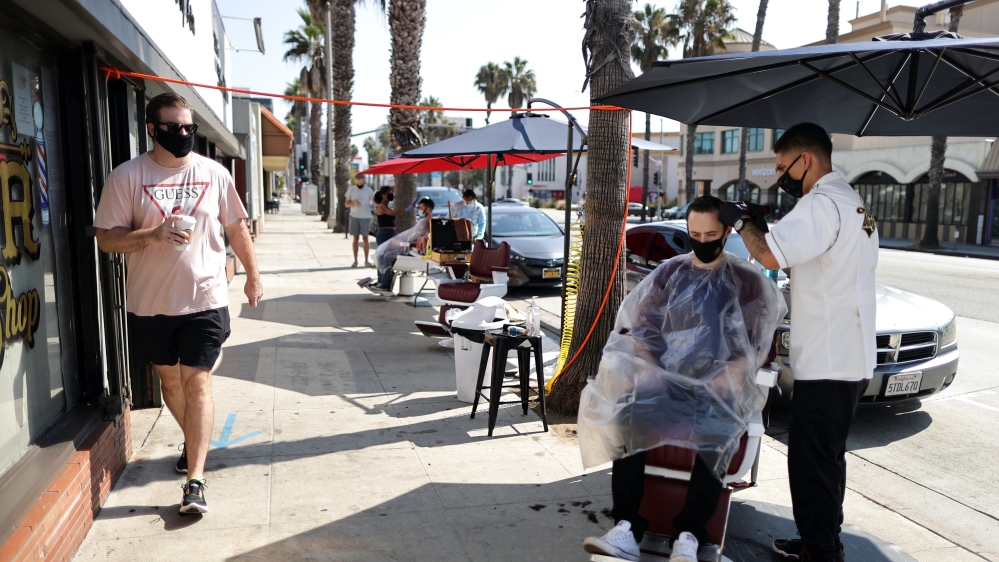 A man getting a haircut amid the global outbreak of the coronavirus in Santa Monica, California, US [File: Lucy Nicholson/Reuters]

The slowdown in spending last month was underscored by a 5.7 percent drop in sales at sporting goods, hobby, musical instrument and book stores. Receipts at food and beverage stores fell 1.2 percent, while online and mail-order retail sales were flat.

While sales at clothing outlets gained 2.9 percent, they remained 20 percent below the February level. Receipts at restaurants and bars rose 4.7 percent. Though sales at these establishments accounted for a chunk of overall retail sales last month, they were still more than 16 percent below their pre-pandemic level.

Sales at building material stores rebounded 2.0 percent and receipts at furniture outlets rose 2.1 percent. The strength in these categories likely reflects a resilient housing market, which is being boosted by historically low mortgage rates and the migration to suburbs and lower-density areas as more workers continue to operate from home because of the pandemic.

A report on Wednesday showed confidence among single-family homebuilders rose to a record high in September.

“The sector clearly has benefitted from low mortgage rates in recent months,” said Daniel Silver, an economist at JPMorgan in New York.