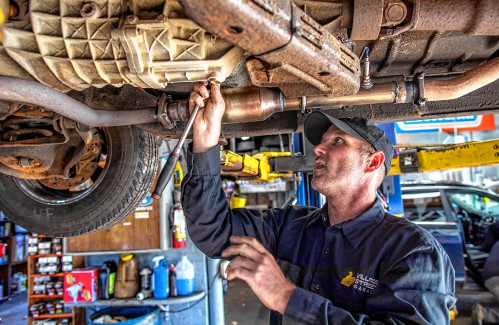 However, it does reflect the same over-arching argument: How much control should manufacturers have over their product after it is bought?

The issue in Massachusetts concerns data from a vehicle’s computer system that is necessary to do repairs. In 2012 voters passed a referendum allowing independent shops to plug into a car to help diagnose problems so that they could make fixes, a decision often cited as the most sweeping right-to-repair success the country has seen.

The new referendum, if passed, would expand this to cover wirelessly transmitted mechanical car data, known as telematics. Those systems monitor and send real-time readings on the vehicle back to the manufacturer and they are increasingly necessary for diagnosing and repairing cars; independent repair shops say they should have access to it.

Car makers and dealers oppose the referendum, saying this data contains valuable information that could be used for nefarious purposes including location data that could be used in domestic violence situations, as a particularly disturbing commercial suggests. Proponents, including national auto-parts chains, say this is baloney and the only reason to keep telematics secret is to force people to use manufacturers’ expensive repair service.

This is a subset of the whole right-to-repair argument, which says that people who buy something should be able to do anything they want with it, including repair it or alter it, and that manufacturers shouldn’t be allowed to block those efforts by withholding manuals or using software blocks.

A group called Repair.org got versions of laws proposed in about 20 states, including New Hampshire.

In New Hampshire, right-to-repair came before the Legislature last year in a “digital electronic product repair” bill that was sent to a study committee. It would require makers of electronic products to provide independent repair facilities with diagnostic and repair information. Since almost everything these days has electronics in it, the result could be quite sweeping.

At hearings in Concord last year, a number of industry people warned that amateurs would use the information to override safety equipment on appliances or turn off pollution controls on lawn tractors – a possibility that led the Department of Environmental Services to urge that the bill be killed.

Concerns were also raised about being first in the nation, something we usually embrace. Several lawmakers were worried that if a small state like New Hampshire unilaterally passed the bill, some manufacturers might refuse to sell their products here.

(David Brooks can be reached at 369-3313 or [email protected] or on Twitter @GraniteGeek.)