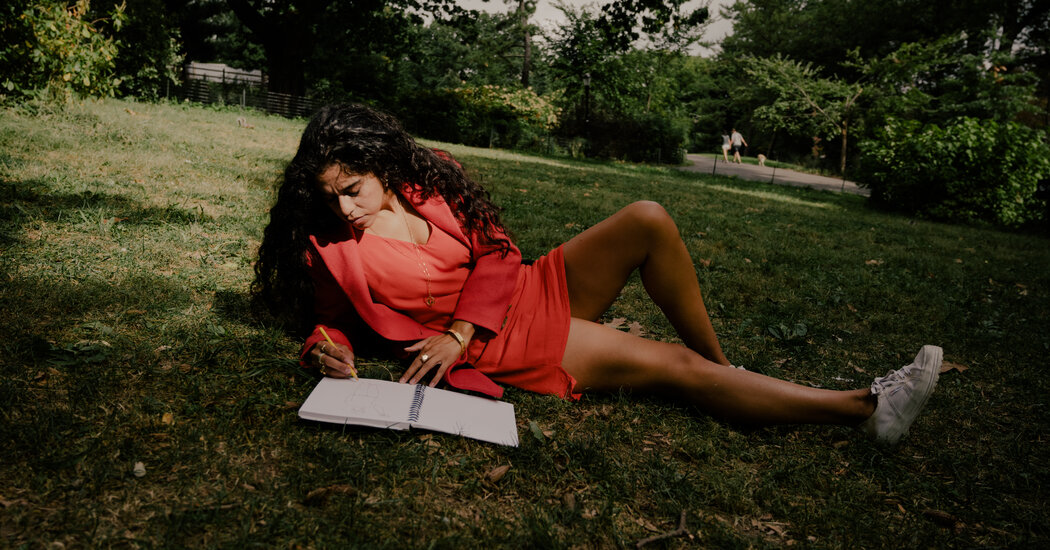 For Mona Chalabi, 33, a Brooklyn-based artist and illustrator, data has been a special kind of solace during the pandemic.

“Let’s say I’m really freaking out about Covid — I’ll remind myself of what the case rate is per 100,000 residents rather than looking at these overall numbers,” she said in a recent interview over Zoom. Parsing through numbers and turning them into something that people could easily understand, and even find comfort in, has always been Ms. Chalabi’s method.

Her latest artwork, presented by Lower Manhattan Cultural Council and on view through Nov. 30 in the Westfield World Trade Center, is titled “100 New Yorkers.” It uses census data to depict the racial, social and economic diversity of the city. In one corner, people crowd around a hot dog cart. In another, a man sits on a piece of cardboard with a cup, asking for change. A majority of the characters are people of color, from all walks of life.

“I am trying to show the population of this city in a way that allows that same population to feel seen in the data,” said Ms. Chalabi, who is originally from London. “I hope that when you pass those 100 characters, you see yourself.”

Ms. Chalabi is also not afraid to get more political in her work. This summer, a few weeks into nationwide protests against police brutality, Ms. Chalabi posted a bar graph on Instagram that served as a reminder of the length of some of the most consequential civil rights protests in history — from the Greensboro sit-ins (176 days) to the Montgomery bus boycott (382 days). “I’m energized for the long days ahead,” she wrote in the caption.

At the time of our conversation, Ms. Chalabi was on the last day of a self-imposed quarantine. A few weeks earlier, she had traveled to London to visit her mother, and Ms. Chalabi shut herself in her apartment as soon as she returned to New York. Normally, Ms. Chalabi would be skateboarding at basketball courts (something she picked up in summer camp where, as she tells it, it was just her “and a bunch of boys”), but when we spoke, she had spent much of her time indoors, watching TV, drawing and dealing with her landlord.

“Maybe hearing about my days at home is going to be boring or maybe it’s going to be an accurate depiction of most of our lives,” Ms. Chalabi said, in true self-deprecating British form. These are edited excerpts from our conversation.

I woke up and felt horrible, I felt so anxious. My landlord has threatened me with eviction, which is really stressful. But if I’m not going to live here, then where?

I don’t think London is home anymore. And I also feel scared about leaving this country because this is where I built my career, and if I were to leave, can I sustain my career? I’m sick of these four walls but I can’t imagine another four that I would be happy in.

After getting out of bed, I just got into my routine with work. For better or for worse, it really is the thing that gets me out of my head. The act of concentrating takes me away from whatever else it is I’m worried about.

I’m taking a screenwriting class at the moment with a friend of mine. So at 2 p.m. we both logged on for that.

There are 20 other people in the class and obviously they don’t know that my friend and I already know each other, so sometimes it feels like we’re back in school, texting on the side while the class is going on, being like, “Oh my God, Brad just won’t stop biting his fingernails.”

Then I binge-watched the entirety of “The Duchess” by Katherine Ryan. I know it has taken her a long time to get to the point where she’s able to write a scripted show on Netflix, and it paid off. I think the show is fantastic. It was just really great to be cheerleading as you’re watching.

I’m in the process of pitching a book, so on Monday I had three calls with different publishers. I think the first call went really badly. I went to drink some of my coffee and just completely poured it down me. And no one on the call said anything, so I was like, “OK, I guess I’m just going to have coffee all over me for the rest of this call, but also could you please give me money?”

I also had a call with TED because I’m working on a podcast with them that will basically do what I do — use data to answer questions.

At 5 p.m., I came back out [of the bathroom] to find my landlord in my apartment. Sometimes she just walks in, which is another reason why I’d like to move. So, I had a bit of a tête-à-tête with her.

And then, at about 8 p.m., I started watching TV. I only recently discovered that I hate watching new things because I don’t know what’s going to happen and it stresses me out. So I’ve just been watching “Succession” over and over. I think I’ve watched it seven times now. Also, I’m always using my ex’s login whenever I go onto HBO. Every single time I do it I’m like, “I shouldn’t be doing this.”

I also just finished reading “Moms” by Yeong-shin Ma. It’s a graphic novel about a bunch of women in their early 50s that I thought was really, really beautiful.

I had a phone call with Rebecca Carroll — a WNYC journalist who has a podcast called “Come Through.” I kind of wish I hadn’t done it because she asked me what my most memorable moment of the year was and I started crying really hysterically. I was talking about a Black woman in the U.K. who worked as a transport worker and a white dude said to her, “I’ve got Covid,” and then spat on her. Then she, in fact, contracted Covid and died and left behind her [child]. I had just been thinking about that series of events so much and, at that point, it was my first time saying it out loud. To say it out loud was quite upsetting.

I just continued working. I usually work up until dinner and then, after I have dinner, the only work that I will do is the illustrations or photo editing stuff because it requires less brain power.

In my six years in New York, I can honestly say I think I’ve cooked about 10 times. So now I’ve started cooking begrudgingly and the stuff I make is absolutely disgusting. My fantastic recipes have included a vegetarian sausage with a salad or two pieces of toast with a salad or instant noodles.

But I think I finally do understand, a little bit, the catharsis of just chopping. It’s a lot like illustrating — doing something with your hands is quite comforting.