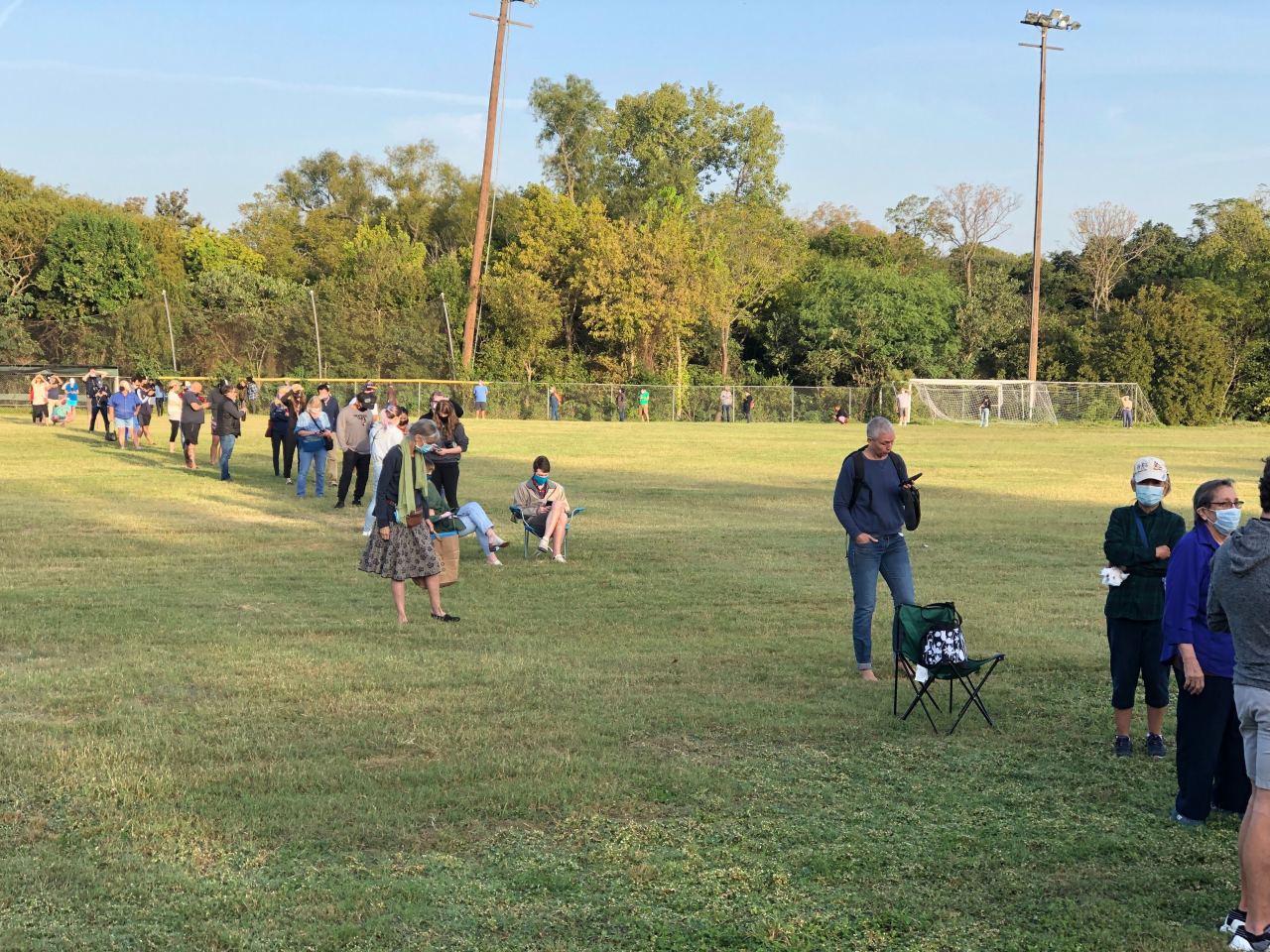 Editor’s Note: This live blog is no longer being updated.

CENTRAL TEXAS (KXAN) — Viewers alerted to us a few problems during the first day of early voting that we were able to confirm. Most polling locations seem to be running smoothly, but wait times are lengthy. Here’s the latest:

9:20 p.m. – In Williamson County, 22,688 people voted on Tuesday, a new record for the first day of early voting which makes up 6% of all registered voters.

In Travis County, 35,873 people voted early in person Tuesday, compared to 33,664 who voted on the first day of early voting in the 2016 presidential election.

In Caldwell County, misspelled names and incorrect boundaries for a special election forced the county to reprint more than 600 absentee ballots.

5:45 p.m. – Williamson County Elections reported the power is back on at the Georgetown Randalls, after briefly going out earlier in the afternoon.

4:55 p.m. – Williamson County Elections reported a power outage at the Georgetown Randalls voting site. The office asked voters to avoid that polling location until power is restored. Nearby locations include the Worship Place at 811 Sun City Boulevard and the Georgetown ISD Technology Building at 603 Lakeway Drive, the elections office said.

In Travis County, a photo taken by an absentee voter in Austin appears to show mail-in ballots leaking from a United States Postal Service drop box. By 3 p.m., KXAN verified the ballots were no longer spilling out from the drop box. A USPS spokesperson said they are aware of the photo.

4:15 p.m. – The Austin Police Department explained that officers will remain on “tactical alert” during the week of the election in case there is any unrest.

During a news conference Tuesday afternoon, Assistant Chief Joe Chacon said this means that every officer will be in uniform and have equipment to respond in case the need should arise. Police, however, do not have any specific information about potential unrest happening at any polling locations at this time.

Chacon said the department is “adequately staffed” to be able to handle this responsibility in the coming weeks. Officers will checking out polling sites in the course of their regular patrols, he noted. However, that’s mostly to make sure lines of voters are not impeding traffic or raising safety concerns with where they’re located at those places.

Police said it’s not unusual to go into “tactical alert.” They usually do so during big events, like SXSW or the Austin City Limits Music Festival.

12:25 p.m. – Long lines and wait times were reported at Austin Oaks Church in southwest Austin, and several people emailed us saying there were problems with scanners and staff didn’t have enough equipment.

We heard back from the Travis County Clerk’s office about the issue and they said there were technical issue with the scanners there, and while several people complained about dropping their ballots in the bottom of the scanners, the clerk’s office said that’s the proper procedure when scanners aren’t working.

10:29 a.m. – Long lines seen outside the Randalls located on Gattis School Road in Round Rock. Voters snake along the shopping center connected to the store and off into the street.

“I got here around 6:30 this morning. It took me about four and a half hours to cast my vote,” said Renee Speed outside the Randalls. “I would have waited in line for three days to vote. I think we are voting for the soul of America this year.”

“I waited and hour and 53 minutes,” said David Haralson. “People are really energized. Whether you are Pro-Biden or Pro-Trump, everybody wants their voices heard.”

10:23 a.m. – “The lines are long,” reports Twitter user in Cedar Park, Jason Berry. Below, voters wait in a curved line on the sidewalk to get inside to cast ballots.

9:19 a.m. – In Williamson County, we can confirm there was a printing machine problem at Anderson Mill Limited District. That issue has now been fixed and the line is moving. Wait times are still at 46 minutes though.

9:17 a.m. – Williamson County confirms there were “connectivity issues” with two of the four ballot card printers at the Randalls at 5721 Williams Drive in Georgetown. Voters will still able to use the remaining two printers. A field tech is working to get the other two back online.

9:25 a.m. – The issue at the Randalls in Georgetown has been fixed, according to the Williamson County Clerk’s Office.

9:09 a.m. – The technical issues at South Austin Recreation Center have been fixed, and voting is now taking place normally.

9:00 a.m. – Every single polling location in Travis County currently has a wait time of more than 20 minutes right now. You can check up to the date times on the Travis County Clerk website.

8:30 a.m. – The Travis County Clerk’s Office confirms problems at the South Austin Rec Center. Our photographer at the scene said a technician arrived at 8:30 a.m. and the line is long.

8:03 a.m. – Millennium Youth Entertainment Complex in east Austin had long lines. The wait was about an hour or so for half the line. Workers tell us they had technical problems initially, but that’s because the machines were set up incorrectly. They are now working and delays due to that are minimal.