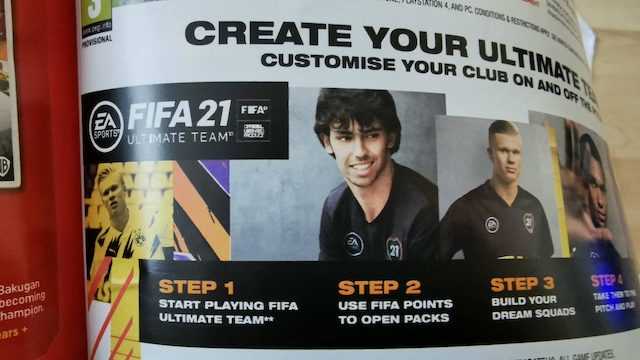 It is never a good thing when your video game company is more widely known for its sketchy business practices than they are for the products they develop — and this has been the case, for quite a long time, actually, with Electronic Arts.

Electronic Arts is often criticised by consumers for their microtransactions — most notably, and infamously, in regards to their management of the Star Wars video game franchise — and new the company is, once again, catching flak from disgruntled costumers.

As spotted by several users on Twitter and Reddit, Electronic Arts has been promoting microtransactions at Smyths Toys — a toys retailer in the United Kingdom — which encourages kids to use “FIFA points to open packs” in FIFA 2021; the latest entry in the football video game series that releases early in October.

For those unaware, the in-game currency in FIFA titles are FIFA Points, which can be used to purchase FIFA Ultimate Team packs that give players random awards, which cane then be used in the game’s Ultimate Team mode.

Players are free to purchase packs like these, sure, but the problem here is that this was published on a toys retailer brochure, which obviously caters to kids — who are not the ones who will be paying for microtransactions.

In some countries in Europe, microtransactions are even considered gambling, although there are still no laws that regulate said practices in the United Kingdom.

The Department for Digital, Culture, Media and Sport in the United Kingdom is currently gathering information in regards to microtransactions and lootboxes in order to have them regulated under gambling law, and calling for evidence will be open until the 22nd of November.

During an interview with Eurogamer back in August of 2019, FIFA Ultimate Team Leader Garreth Reeder stated that they had no plans to change the way FIFA Ultimate Team packs work, stating: “No, it’s maybe – based on feedback – something we look at down the road. But, I think, we look at it as consumer choice for what they want to open… We’ll keep listening to feedback but we’ve no plans to change that.”

Again, players are free to purchase lootboxes all they want. Electronic Arts openly advertising microtransactions and lootboxes in Smyths Toys, however, is already being seen as unethical; even more so when the developer blatantly promotes child gambling.