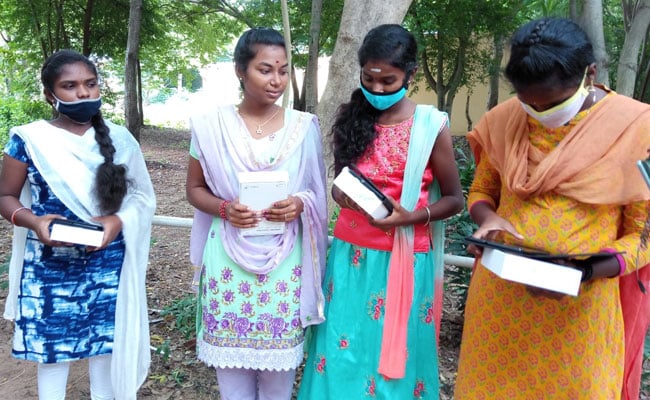 A school in Chennai has distributed tablets to 120 students of Class 9-12 for free in an attempt to bridge the digital divide as the coronavirus pandemic has shut down schools across the country. The Olcott Memorial Higher Secondary School teaches underprivileged children and charges no fees. It provides all supplies, including uniforms to the students for free.

At their home in a cramped up area of Besant Nagar, two students of Class 12, Thaslin Parvin and Victoria, who have missed two months’ classes without a smartphone or computer, now have their tablets to catch up with their studies. Ms Parvin’s father earns a living ironing clothes while Victoria’s mother works as a domestic help.

“I only have my father’s phone. It has no network. It has many issues. This is so useful,” Ms Thaslin told NDTV. “This is very useful. Earlier I used my brother’s phone but couldn’t use it after he resumed his job.” Victoria said.

Both of them want to be lawyers.

K Manikandan, who came to the school with his uncle to collect his tablet, is being raised by a single mother who works as a domestic help. He hopes the tablet will help him to nurture his dreams of becoming an Indian Administrative Services officer.

“I was simply sitting at home these five months as we don’t have phone at home” he said.

The private school, run by the Theosophical Society, raised Rs 16 lakh for this purpose. Asha for Education, a US-registered not-for-profit organisation said they donated 100 tablets while Rotary Club of Chennai Mitra pitched in with laptops for teachers.

Encouraged by the response, the school is now working to provide tablets to all students of classes eight and nine.

Sashikala Sriram, a honorary academic director, said, “These are all underprivileged children. They should not be denied the right to education. I am happy to say there are quite a lot of philanthropists and donors who care for the nation”.

Two techies, who also went to college together, Rahul Shankar and Sandeep Rajarajan, helped them get free software – G Suite – from Google and a good deal from a smartphone manufacturer.

The school says ultimately it worked out a total of Rs 13,000 for the device, sim and internet charges for a year. Students will have to return the tablet at the end of the academic year so the next batch can use them.

The techies also helped the school with a customised tablet configuration – from downloading required apps to blocking unnecessary downloads and browsing in a centralised way. Rahul Shankar, an analyst with a software consulting company, said, “We don’t want students to miss out or lose hope of finishing school just because they could not afford a device. We will feel a sense of achievement if this aids students clear exams”.

Sandeep Rajarajan added, “We want to see how successfully such a cost effective model can be implemented where students can’t afford to go digital”.

Based on this experience, the two also plan to reach out to other schools to help underprivileged children.

Many say the pandemic-triggered online education has made the digital divide all the more conspicuous, even leading to cases of deaths by suicide and that this attempt to bridge the gap by is a model worth replicating.