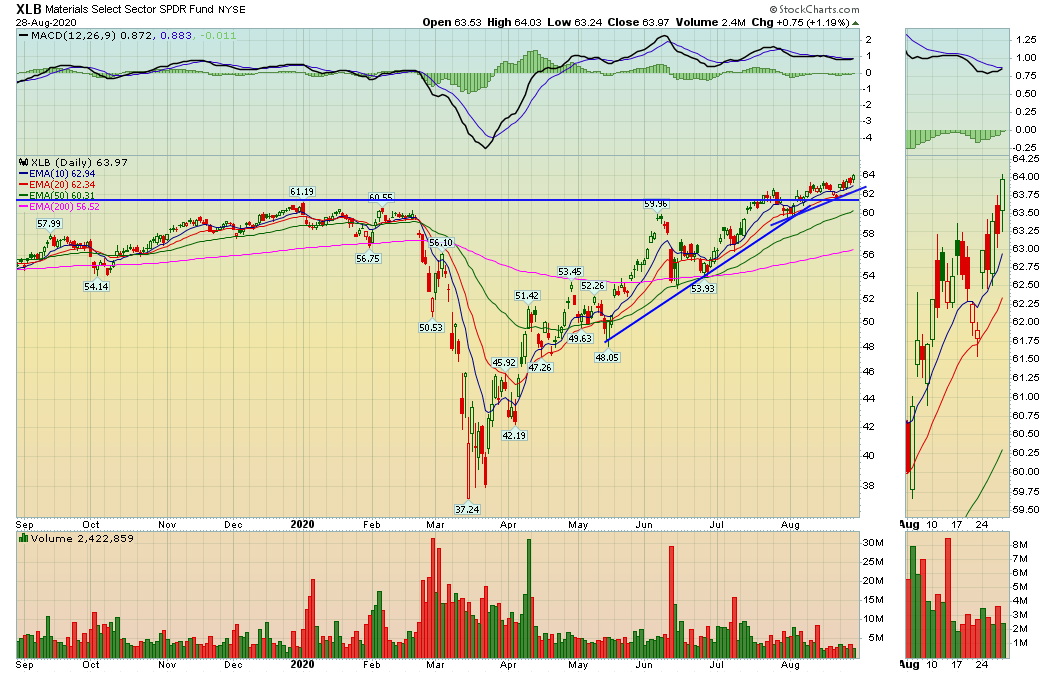 Investment Thesis: health care and consumer staples are positioning to outperform in 4Q20, according to an RRG analysis. Technology and communication services are now moving into the lagging quadrant.

Let’s start with a table of the best-performing ETFs:

Next, let’s look at the three worst-performing sectors.

Utilities and energy appear in all five time frames. Real estate is in four.

Next, let’s break the sectors down, starting with XLB and XLI: 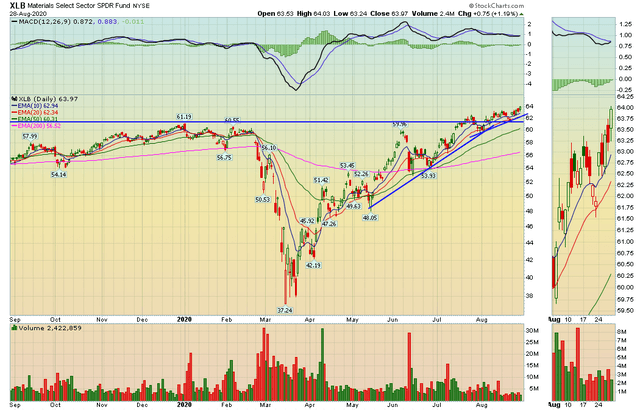 XLB is in a strong rally. In the Spring, it sold off with the broader market, falling to the upper $30s. It has since rallied and is now at a 1-year high. However, momentum is declining. 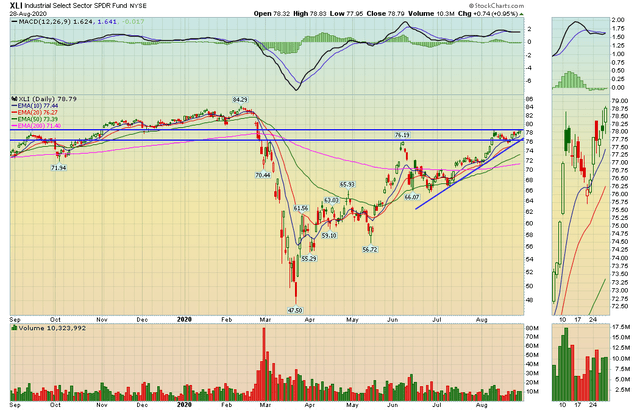 XLI has also rallied. It is now just above recently established resistance levels.

Why have both sectors rallied so strongly? Investors were betting that both sectors would rebound quickly after the lockdowns, which has largely occurred.

Next, let’s look at consumer discretionary and consumer staples: 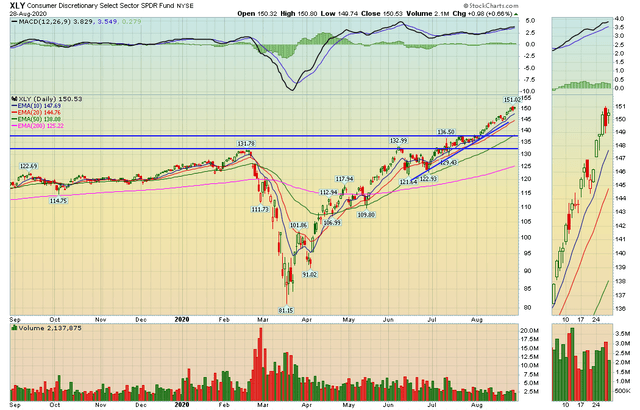 Consumer discretionary is also in a very strong uptrend. It has risen from an absolute low of $81.15 in mid-March to $151 – an 86% increase. The chart is very bullish – prices are above the EMAs, all the EMAs are rising, and the shorter EMAs are above the longer EMAs. Momentum is strong. 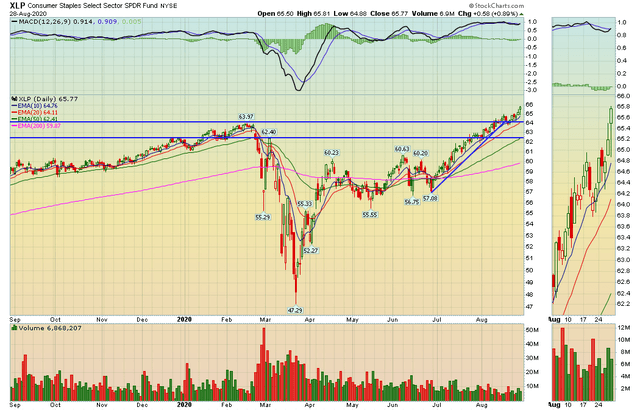 Consumer staples have formed two uptrends – a brief counter-rally to the Spring sell-off that took the index into early April, and a second rally that began at the end of June. Prices are now at a 1-year high.

The economic backdrop for this sector is positive, supporting a continued move higher.

Next, here are the two main technology ETFs: 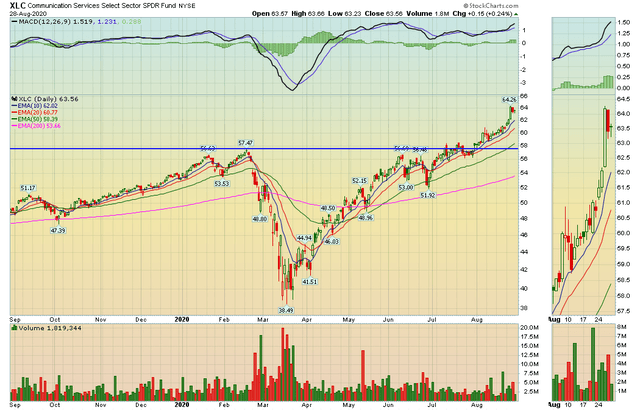 Communication services made a new high this week. It printed a very strong candle on Wednesday and then consolidated gains on Thursday and Friday. 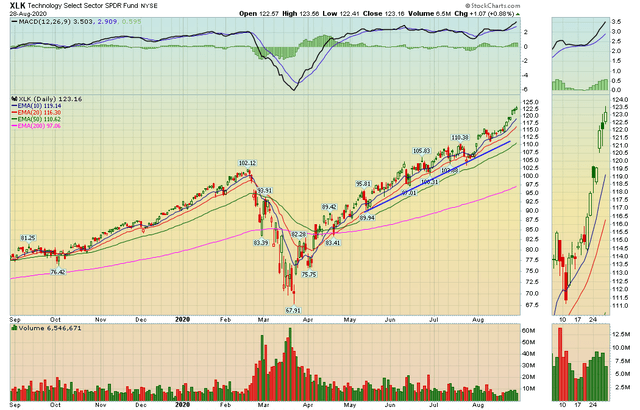 Tech gapped higher on Wednesday and continued higher for the rest of the week.

Both of these sectors are vitally important to the market; they comprise over 60% of the QQQ and nearly 40% of the SPY. Both have also benefitted disproportionately from the pandemic economy, which has shifted more activity into the online and virtual realm. Both include some of the largest companies in the world – Apple (AAPL), Amazon (NASDAQ:AMZN), and Google (GOOG, GOOGL).

Next, let’s look at four laggards: 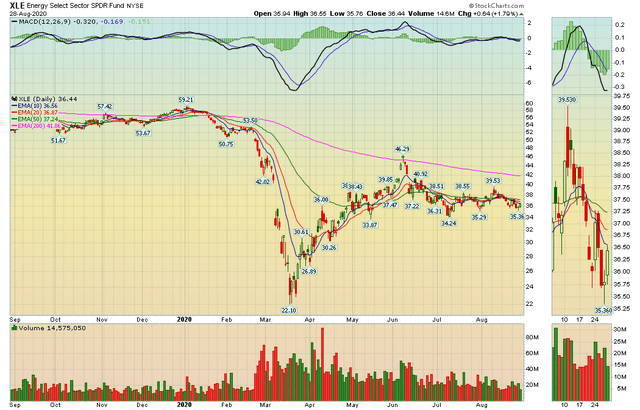 Energy is still below its 200-day EMA and has been consolidating sideways since the beginning of July. Prices are currently in a “barbed wire” pattern, where price candles are at the same level as the shorter EMAs. The backstory to this sector is the low level of oil prices, which briefly went negative in the Spring. They have since rebounded, but are still at low levels. 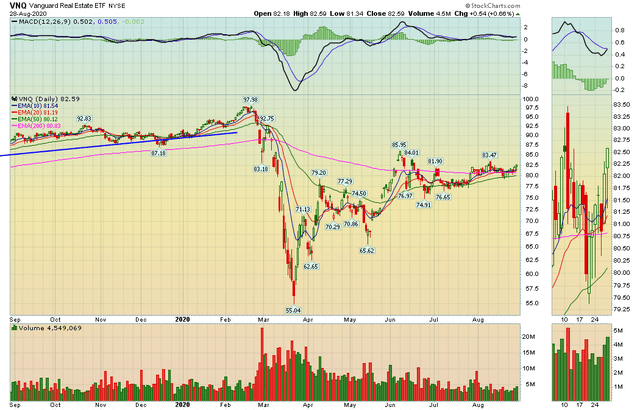 Real estate is also in a barbed wire pattern, although it’s entangled not only with the shorter-term EMAs but also the 200-day EMA. The economic backstory is soft. Residential and retail REITs have seen declining rent payment caused by layoffs and lockdowns, while the rise of the virtual office will lead companies to rethink commercial real estate. 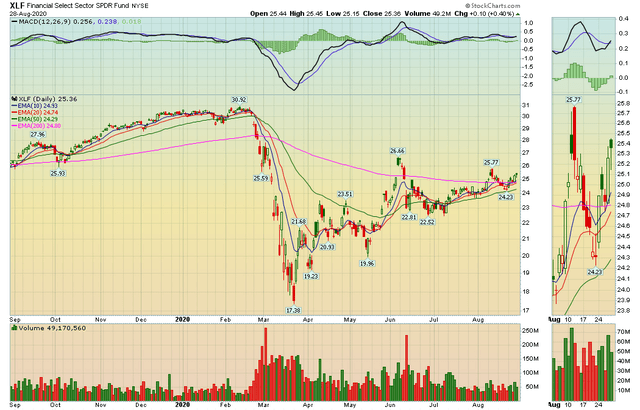 Financials have tried to rally a few times, only to be pulled back to the 200-day EMA. Over the next few quarters, this sector will report increasing losses caused by rising loan defaults. 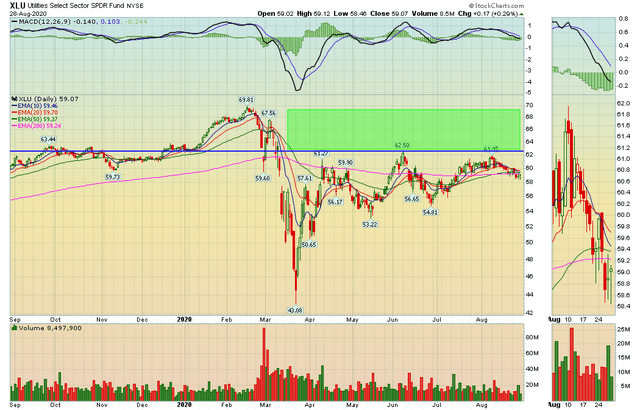 Finally, utilities haven’t been able to move above the 200-day EMA. The primary reason is weak demand; as businesses shut down, the demand for power drops.

All that’s left is the healthcare ETF: 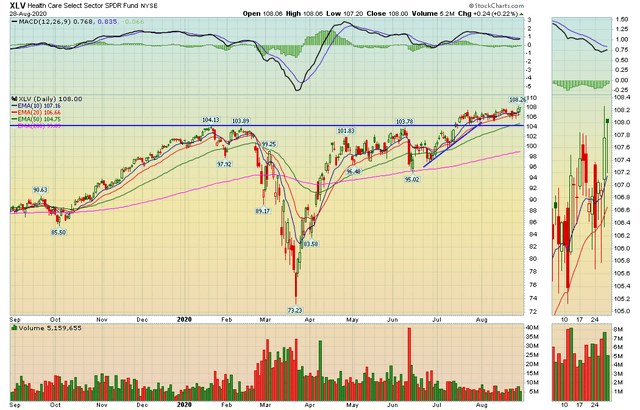 After breaking through resistance at the $104 level, health care consolidated gains for about a month. Prices are now looking to move higher.

So, where should we invest? I’m a big believer in the relative rotation graph concept, as it allows investors to identify sectors while they’re cheap. It also assumes a level of patience because it takes time for these trades to develop.

To get an idea of where to invest, let’s take a look at the RRG chart: 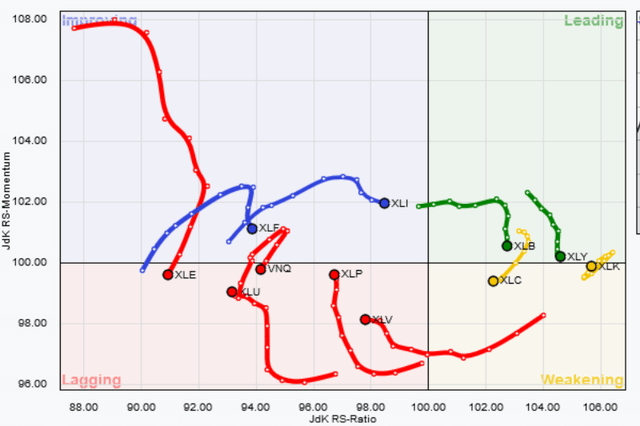 The three defensive sectors – XLU, XLP, and XLV – are lagging. Staples is about to cross over into the improving quadrant. Utilities and health care were moving in that direction, but both are now trending further into the lagging quadrant. Going forward, the data says health care and consumer staples are the sectors to buy right now, realizing that gains will start to appear in 4Q20.

Three charts have strong momentum appeal: technology, communication services, and consumer discretionary. However, long positions should be hedged in the event of a quick sell-off.

Disclosure: I am/we are long XLU. I wrote this article myself, and it expresses my own opinions. I am not receiving compensation for it (other than from Seeking Alpha). I have no business relationship with any company whose stock is mentioned in this article.